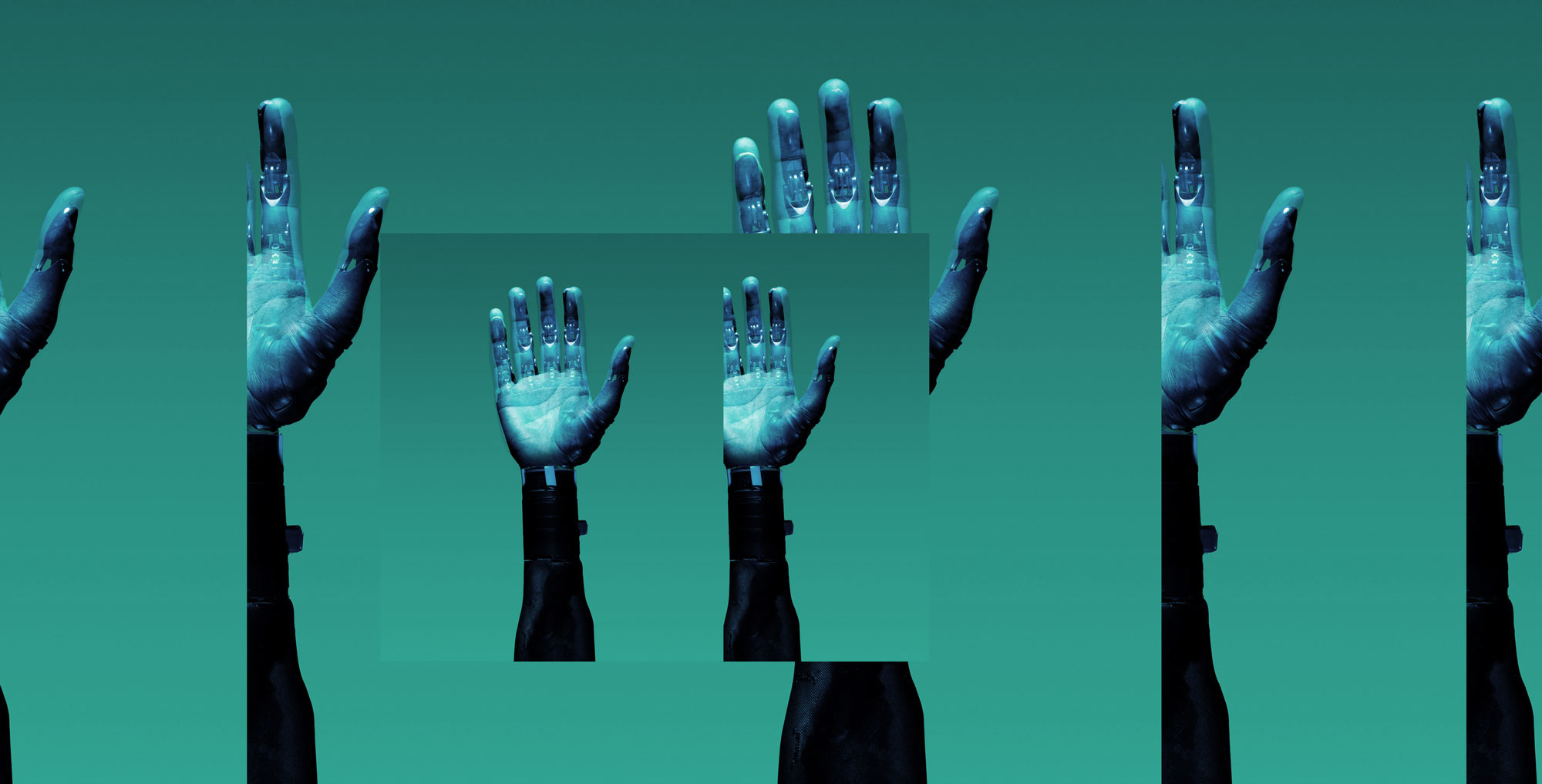 what posthumanist thought could mean for design in the near future
June 20, 2017
essay

Before the agricultural revolution 12,000 years ago, humans were primarily animists, integrated with their immediate environment in ways unfathomable today. Individual humans identified themselves as one amongst many species, cohabiting the planet with deer, elephants and monitor lizards. With the advent of theist religions, the relationship between man and god came to centre-stage and deflected attention from all non-human entities. While agricultural endeavours domesticated animals and propagated large-scale modification of nature, religious doctrine instilled in people a metaphysical sense of purpose. In Europe approximately 400 years ago, humanism slowly began to replace theism as the primary philosophy offering meaning to our existence. European humanists propagated use of reason and rationality to improve lives and posited human experience as the apex of existence. Blind submission to a supreme authority dwindled, eventually leading to the rise of sociopolitical agendas like liberalism, communism, socialism and the free market.

Modern humanism, having evolved from its prehistoric animist and ancient theistic phase, finds itself in an emergent posthuman world. A cohesive definition of posthumanism is impossible to articulate. One of its aims is to redefine what it means to be human; to view the human experience not as a unique state of existence but as a group of complex algorithms computing information which happen to exist in a biological substrate. Yet, they can be replicated and extended beyond the biology that they emerged from, implying that there are no essential differences - between bodily existence and computer stimulation, cybernetic mechanism and biological organism, artificial intelligence and human cognition.

The goal of this essay is to investigate what posthumanist thought could mean for design in the near future. In terms of relevance, it can be divided into three broad discussions. The first of these relates to the narrow but poignant subject of transhumanism, a biological kind of posthumanism. Through recent advancements in nano-biotechnology, robotics, neurology and genetic engineering, we are already living in a nascent transhuman world. We have been augmenting our capabilities using tech like contact lenses and pacemakers in the past, and will continue to edit our bodies in the near future with cellular robots, electromagnetic brain chips and bionic limbs. The application of these technologies is not just medicinal but also focussed towards increasing productivity, intelligence, lifespan and wellbeing. Yuval Noah Harari, puts it best in his book Homo Deus: “For 300 years the world has been dominated by humanism, which sanctifies the life, happiness and power of Homo Sapiens. The attempt to gain immortality, bliss and divinity merely takes the long-standing humanist ideals to their logical conclusion”.[1] This observation positions posthumanism not as an antithesis but a sequel to humanism. In this suspiciously utopian world, the importance of design is on the rise. Design as a discipline will have to expand from its general perception of a skill to that of a mindset. Considering how robotics and communication will strive to integrate with human behaviour at a biological level, design thinking will have to be incorporated into other fields of study as well. Design will become an essential subset of every profession - doctors, engineers and businessman, will have to adapt to a highly user-pleasing world. Designers will have to lean further on their ability to collaborate and reinvent themselves. Since design trends are changing faster than people’s lifespans, a designer could be working with on-screen interfaces today, but may have to move to designing augmented reality or embodied interactions tomorrow. In the coming century, designers will be central to the economy, since focus will shift from thoughtless mass production to intelligent design solutions. As technology makes its way into our bodies, its success solely depends on how it interacts with its users. In order to design highly integrated and embodied interactivity, designers will need to be sensitive, not only to human behaviour but also towards biology and organic chemistry. 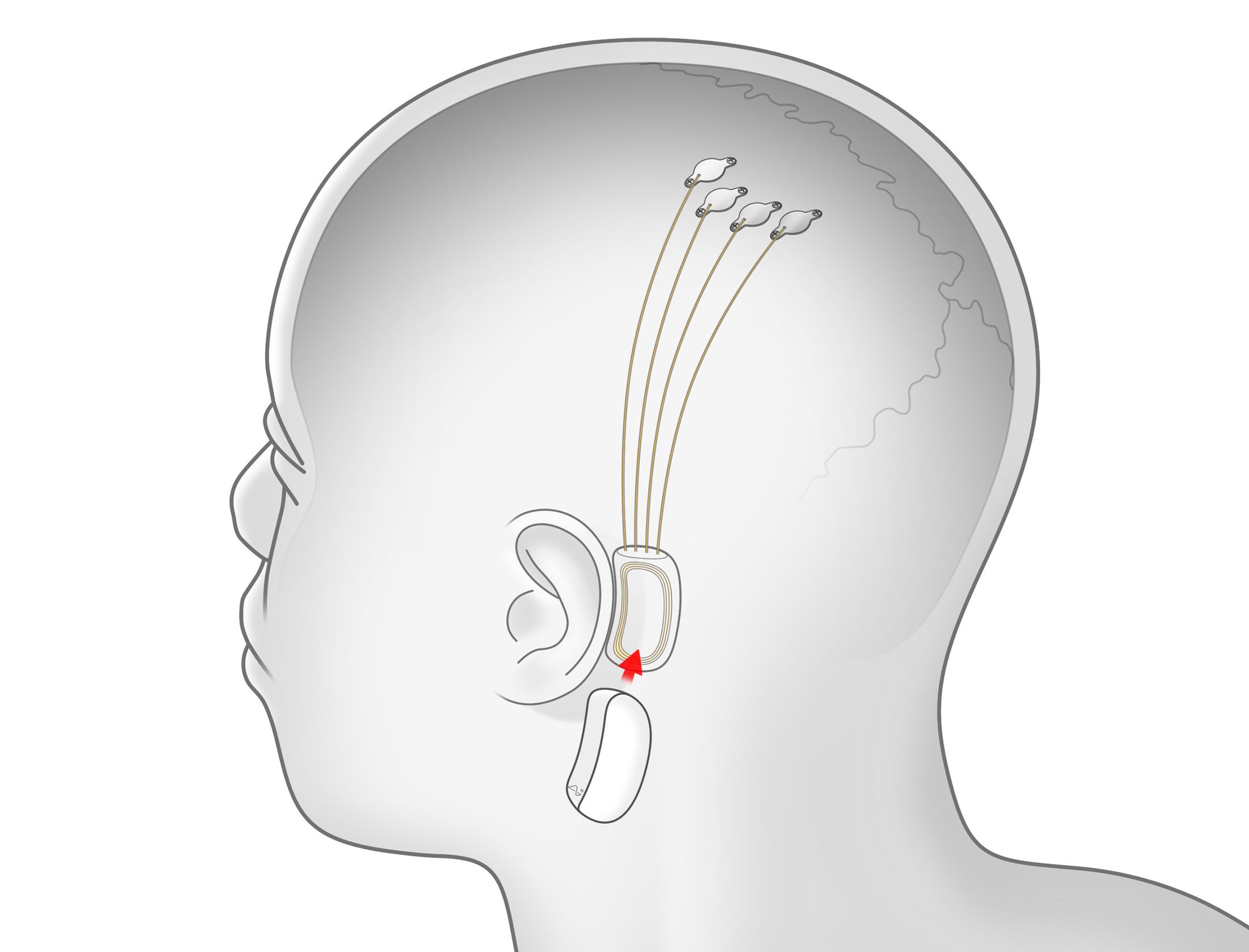 Interfaces between computer technology and human biology - like Elon Musk's Neuralink - will need a new set of design methodologies, as well as renewed socio-ecological considerations

The second discussion, albeit a controversial one, is about AI. Notwithstanding the alleged apocalyptic implications of this topic, its discussion from a posthumanist point of view is pertinent. If we see human beings as mere biological algorithms that evolved over billions of years, capable of executing certain tasks with agency and deliberation towards common larger goals, a parallel can be struck in regards to AI. In this manner, it can be thought of as the next version of human. What does this imply for design as a discipline? In the near future, designers will not only have human users, but will have to design products and processes specifically tailored to AI behavioural patterns. An oversimplified example of this can already be seen today in the design of online marketing campaigns. For an online campaign to be effective, it has to not only convince the user to buy the product, but also convince Google’s algorithm to notice the product. A slogan or a tagline needs to be catchy for humans as well as contain keywords that will give it preference in Google’s search results. As AI takes over more services, we will have to tailor design solutions to suit algorithmic functions as well as the user’s preferences. 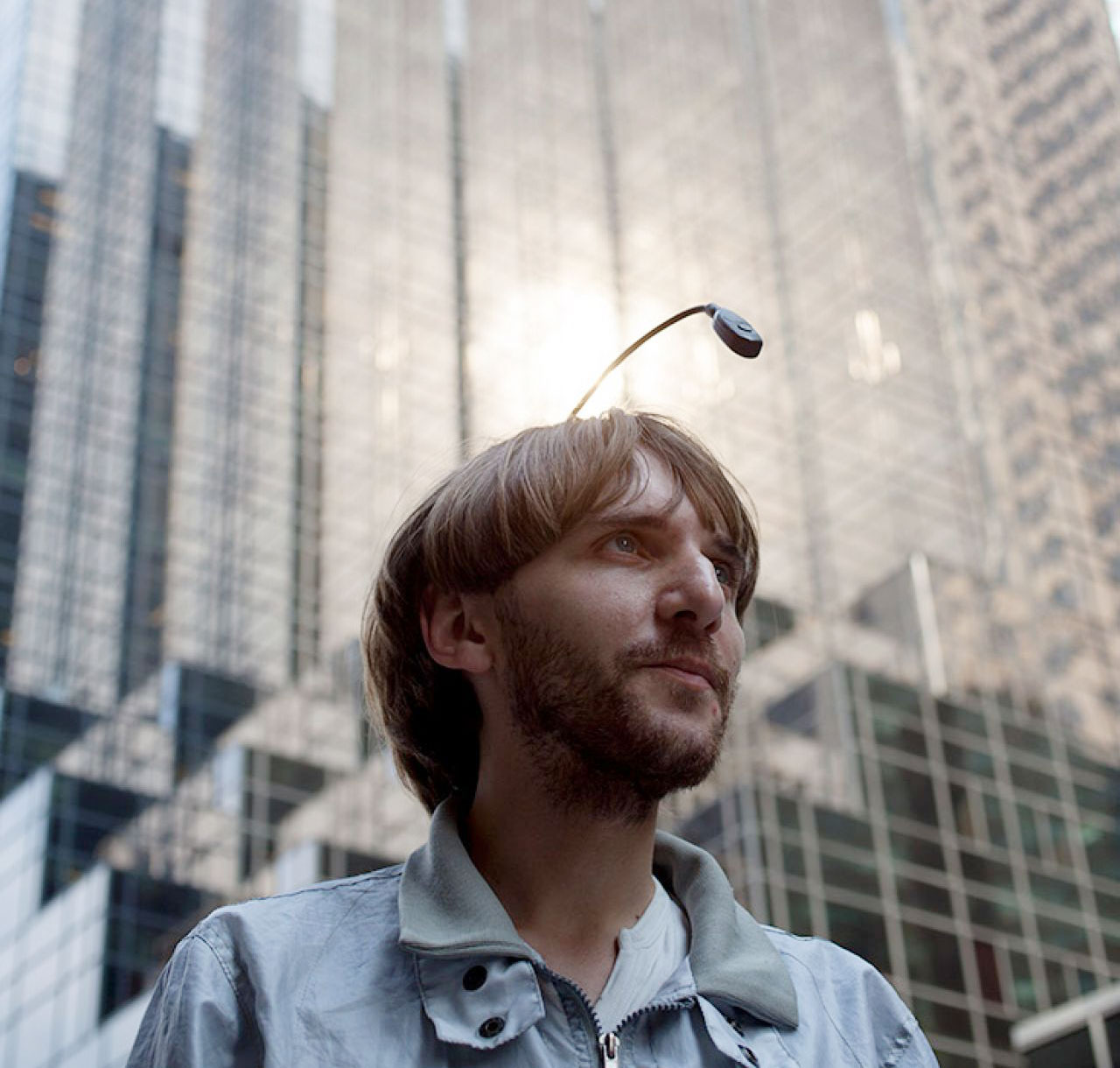 Artist Neil Harbisson, and emerging from the back of his head is his seeing device that translates color into audible sound. Photo by The Cyborg Foundation.

The third and most important discussion is a philosophical one. Here, posthumanism can be looked at as an antithesis to humanism. We used to think of ourselves as the only constant and our surroundings as disposable. Humanism empowered us to modify nature, but posthumanism has made us realise that we are part of this very nature and hence can also be modified. The very existence of machine learning algorithms seeks to remind us that human cognition is possibly not the pinnacle of intelligence. With the dissipation of the human centric perspective, we realise that we are not sacred, and are as editable as our environment. Maybe from combining the organic with the inorganic, we will finally see the fallacy in categorising the world into ‘the artificial’ and ‘the natural’ and realise that the dichotomy was just a result of human arrogance. Neil Harbisson, an avant-garde artist and cyborg activist says, “It’s very human to be a cyborg. We are constantly developing our senses when we are in our mother’s womb, so we just can continue extending our senses when we are outside. I feel that becoming a cyborg is actually getting us closer to nature and to other animal species” [2]. Art has the power to initiate a shift by exposing the public to non-human perspectives. Could we, for instance, use this new symbiosis between art and tech to simulate the awareness experienced by a cockroach? Could we create a virtual reality experience where the user not only sees a glimpse of the Mesozoic, but also feels what it was like to be a dinosaur? In her review of Cary Wolfe’s book, ‘What is Posthumanism?’ Sørina Higgins writes, “...destabilize traditional binaries such as nature/culture, landscape/architecture, viewer/viewed, presence/absence, organic/inorganic, natural/artificial, and, really, human/nonhuman” [3]. The destruction of these binaries will be crucial to posthumanist art and design. 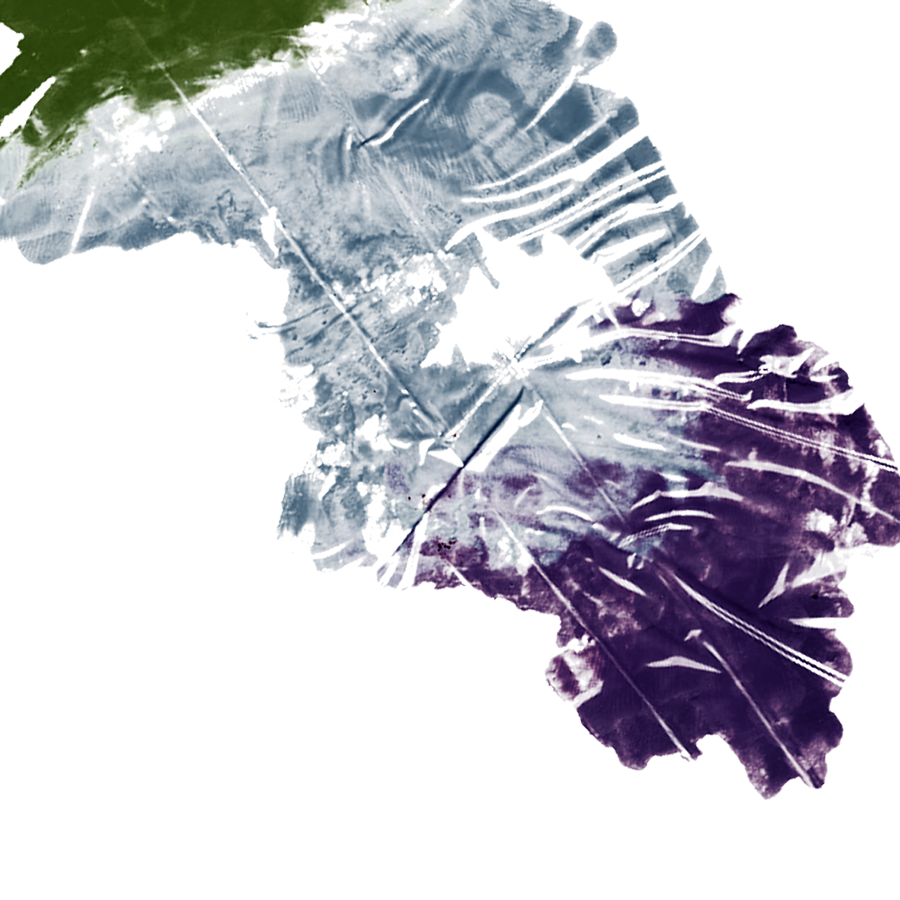 [3] Higgins, S. H. (2012, October 5). What is Posthumanism? The Curator. https://www.curatormagazine.com/sorinahiggins/what-is-posthumanism/

May 2, 2019
Infragraphy Vol 1
Read
The shifting ontology of Reindeer Lichen