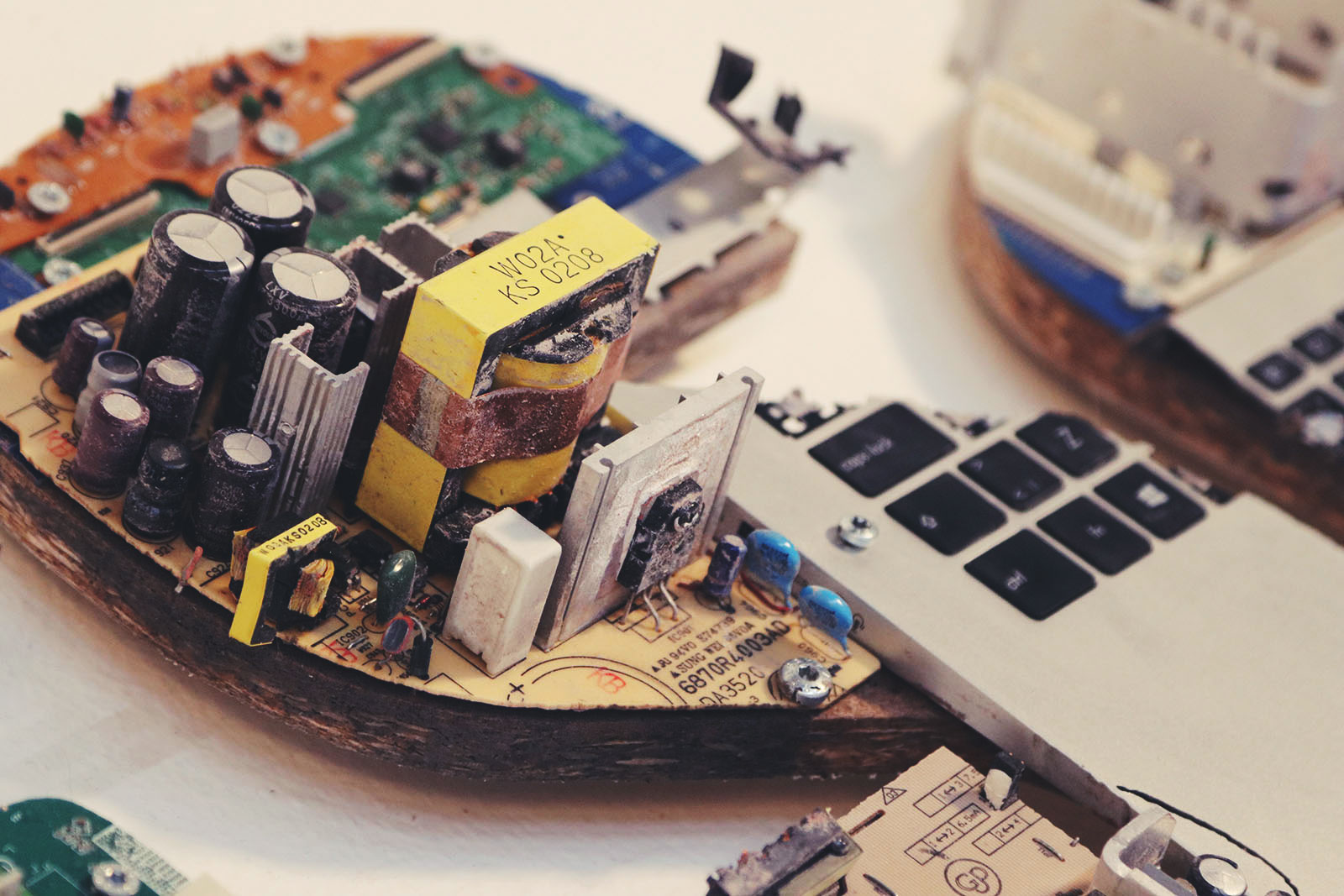 The artwork shown in the image is disseminated by observing processes directly or indirectly related to it. These processes sometimes overlap, and some stages in some processes are artistic, while others are not.

The letters were made by combining waste circuit boards with composite wood. The work is a ‘trash collage’ since the materials - the circuit boards and the wood - were found in the trash. It is a collage not only because it is an assemblage of found objects, but also because the artistic concept and physical form were developed as a direct response to the objects which were found. We found the trash, found a lot of circuit boards and thus found their aesthetic possibilities. These boards were mounted on wood using bolts and cut into the shapes of letters by the waterjet cutter - Omax 55100 Jetmachining Centre - which is one of the artists here. It uses a super-fast jet of water to cut through pretty much anything and the manner in which each component of the circuit board was cut - some clean, some not, some complete, some not - brings to light the machine’s artistic agency. 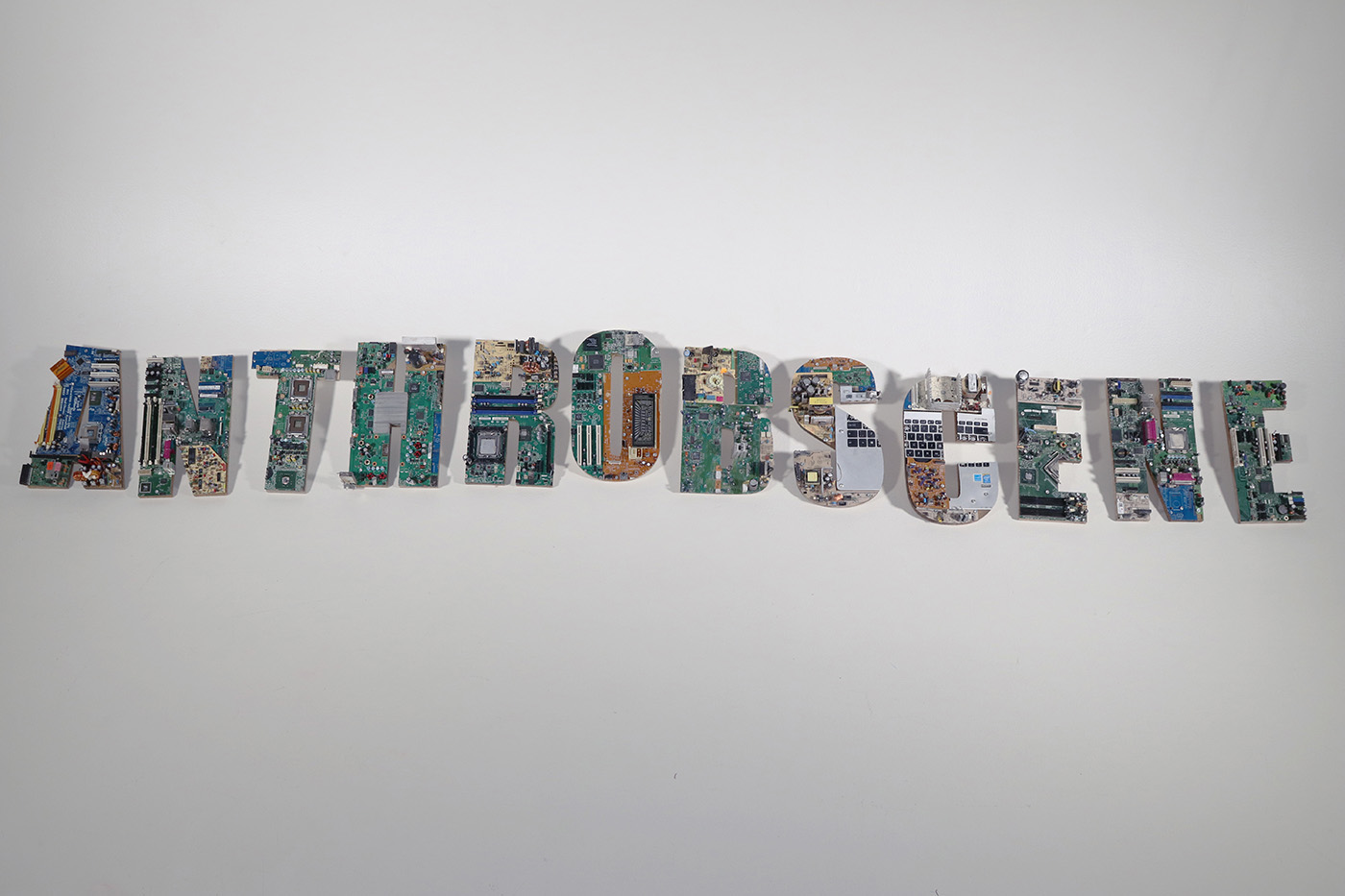 The circuits in consumer electronic products are processual parts of larger circuits through which electricity flows from power infrastructure into the circuit board causing a bunch of other processes to make it perform functions. Circuit bending involves bending the intended flow of electricity in circuits by the artist who redirects the flow of electrons and creates new processes. Parikka and Hertz describe it as:

“Circuit bending is an electronic DIY movement undertaken by individuals without formal training or approval and focused on manipulating circuits and changing the taken-for-granted function of the technology… reminds us that users consistently reappropriate, customize and manipulate consumer products in unexpected ways” [2].

Neoliberal socio-economic ideology, via the decisions of manufacturers or designers, dictates when a particular circuit is ‘old’ and what happens to it. Planned obsolescence [3] is a tactic used by companies to ensure people throw away enough things on time, in order to make space for new things. This process, involving the motivations of corporations and the subsequent false choices presented to consumers, can be understood as another larger circuit of power, where power is less electric and more socioeconomic. The circuit bender not only bends the power flowing through a circuit but also bends the systemic social powers which get to decide what is ‘trash’ and what is ‘new’. 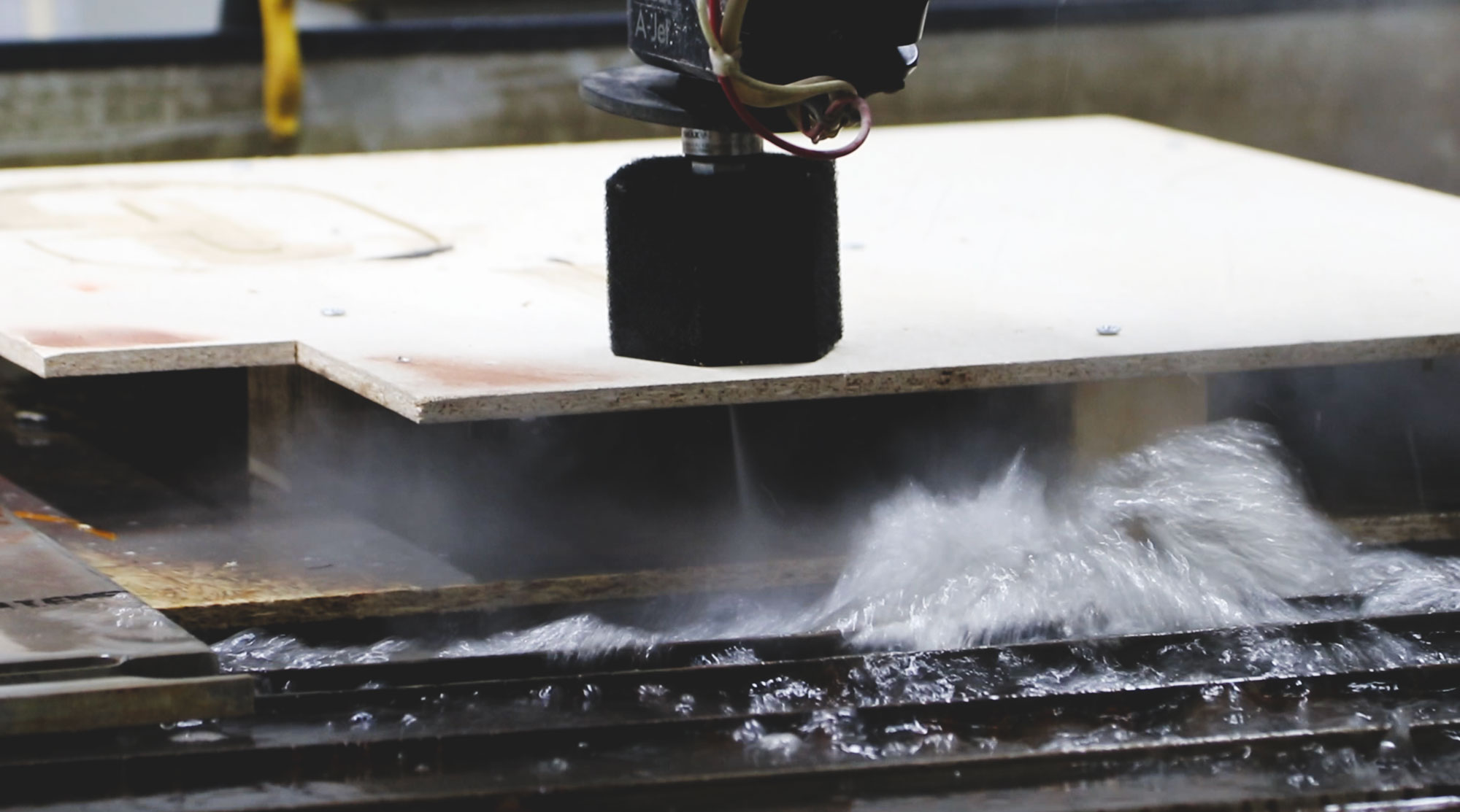 Material journey of the circuit board

The middle of a process is a sensible place to start observing it. The circuit boards in the artwork are made of minerals, metals and plastic which have faced and will continue to face a complicated ecological journey. Notwithstanding the trans-millennia, earthly phenomena which lead to these particles to currently combine as circuit boards, the future of these specific boards have forever been altered by turning them into ‘human art’. No longer will they end up in a landfill somewhere in the global south.They have been rescued by modifying their form and will forever enjoy a position similar to that of a retired monarch; even if the exhibition (or its ‘reign’) is over, it will never be thrown away or even disrespected.
‍

‍Another side to bending circuits is not artistic at all and forces one to question western contemporary art practices. In India for example, the practice of ‘power theft’, [4] i.e. the stealing of electricity is common across rural and urban areas. According to recent studies, the Indian economy looses 16.2$ billion every year to electricity theft  and its frequency increases significantly during election times [5].

The documentary ‘Katiyabaaz - Powerless’ [6], directed by Deepti Kakkar and Fahad Mustafa shows the power theft situation in the city of Kanpur. The power thief, i.e. a local electrician, is actually a kind of robin hood for the poor, who hacks into electric circuits and steals electricity for those who are denied it. Within overlapping political processes - ranging from global inequalities in energy distribution, national political family wars, and local economic structures - the people left without electricity for up to sixteen hours a day remain without any power, be it electric, social or economic. It becomes clear that the ‘power thief’, is actually an activist for social justice. 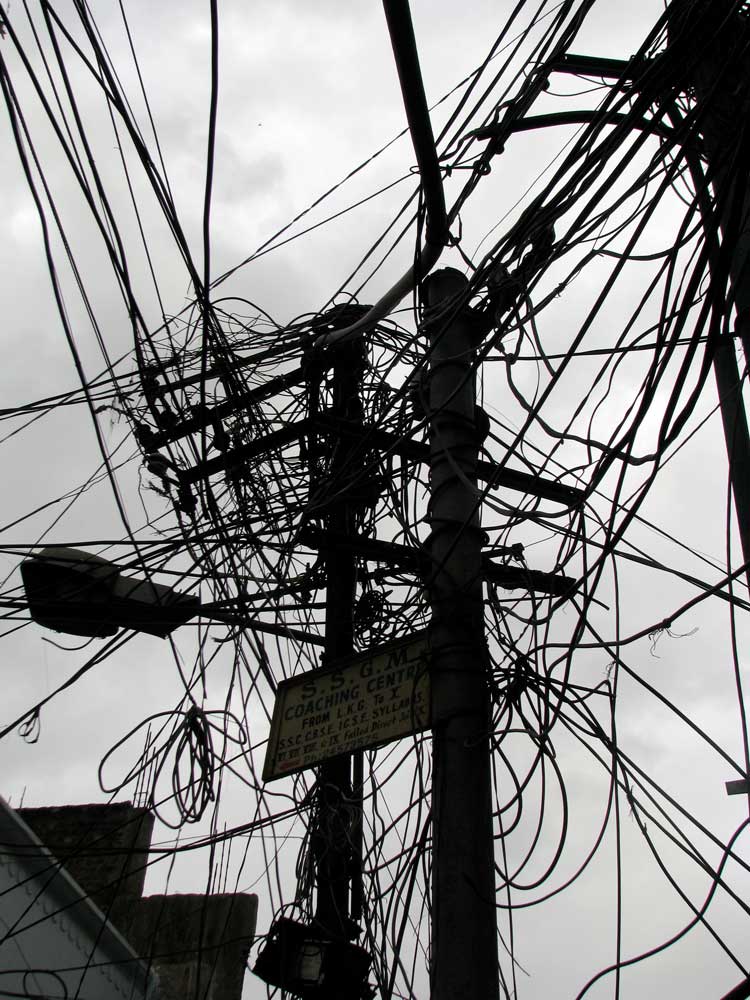 Circuit bending for survival - An example of Hyderabad city’s power grid which has been hacked into, thus bending the flow of electrcity. Photo by McKay Savage on flickr 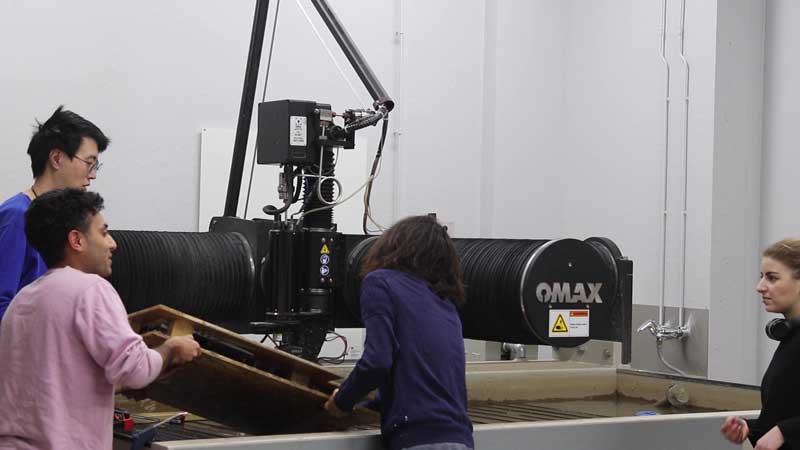 what posthumanist thought could mean for design in the near future

May 2, 2019
Infragraphy Vol 1
Read
The shifting ontology of Reindeer Lichen